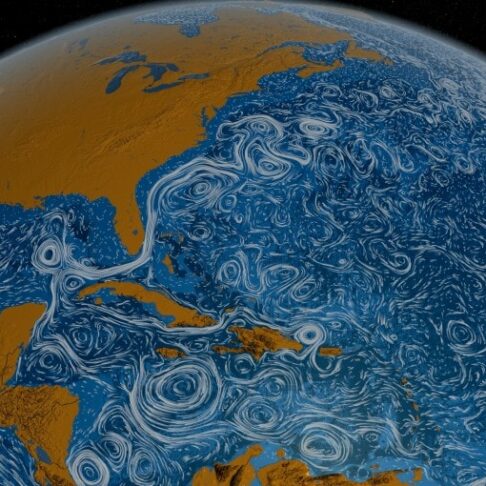 Fluid Dynamics lies at the heart of numerous important problems in climate and environmental sciences. For example, the atmosphere, ocean, cryosphere, and even the interior of the earth are all fluids that move on timescales ranging from seconds to hundreds of millions of years. Quantifying the exchange of anthropogenic heat and carbon between the atmosphere and ocean, or understanding the decline in sea-ice and land-ice in polar oceans and the subsequent sea-level rise, are all inherently fluid mechanical problems. On the environmental side, sea-level rise and coastal impacts, ocean plastics pollution as well as the effect of other pollutants such as oil spills, the harvest of ocean wave energy and urban pollution are some fluid dynamical applications. Tackling all of these problems rely on a number of shared tools that include high-performance computations, assimilations of observational data, machine and deep learning, and data visualization among others.

The goal of this initiative is to bring together, through Imperial-X, scientists from various departments at Imperial College, along with partners in industry and government, whose research activities involve fluid dynamics and cutting edge data-driven methods. This will help cross-pollination of ideas, establish interdisciplinary cutting edge research that builds around the strengths of the College, and will help the College and the UK lead on high impact problems at the heart of climate change and environmental policy.